On 12 November 2003 Endah Dwi Kurniati went for a mammogram test after feeling a hard lump under her right breast. She was then diagnosed with breast cancer stage 2a. She made the day she went through mastectomy, 18 May 2004, her second birthdate.

After the daunting mastectomy procedure, she also had to go through 25 radiotherapy and 6 chemotherapy sessions – all within about 6 months. At the time of treatment her husband was in between jobs, so there was no company insurance coverage to share the medical costs with. The treatment bill amounted to IDR 50 million (approx. USD 5,500 at that time) was on her personal account.

Her mother at the same time was being treated for late stage of cervical cancer and passed away after Endah completed her series of treatment. She teared up when recounting that her mother’s passing was a blessing in disguise. Endah received a refund of her mother’s hajj pilgrimage trip that she paid for. With the refund she continued her treatment. A blessing in disguise indeed!

Wonder how many people didn’t get their chances to survive simply because medical treatment for cancer is beyond their financial reach.

Post-mastectomy, Endah didn’t have reconstructive surgery to restore her breast. Instead she has a silicone pad that she inserts under her bra so that she will look normal in clothing. 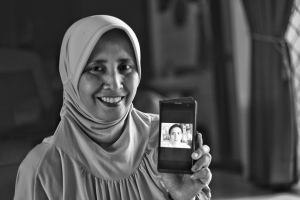 In this photo Endah showed a photo of hers after she completed her post-mastectomy series of treatment. It showed her hair was just growing back after she lost most of it due to chemotherapy and radiotherapy. She was 40 when she decided to have a mastectomy.

She admitted she couldn’t remember struggling to make decision about her health situation. She said her husband and children didn’t treat her special because of the diagnosis. She thinks that’s what gave her strength. The absence of pity from her family empowered her to be in control of her life. She is grateful to see all of her three children graduated from best state universities.

Endah becomes a blessing to fellow women who are now fighting breast cancer that she supports by counseling them and visiting them as time allows.